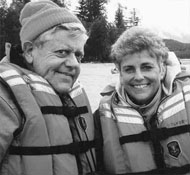 Sally Love H’58 established a Williams Charitable Gift Annuity to support the Class of 1958 Scholarships. Why the scholarship gift? “Because my late husband Jack was a Tyng Scholar. Had Jack been alive for his 50th, I know he would have directed his gift to scholarships.” Jack chose Williams over Dartmouth and Princeton because of the Tyng Scholarship, which covered three years of his medical school tuition. (Sally worked to pay for his books and weekly lab-coat cleanings.) And why a gift annuity? “Because the income will come in handy,” replies Sally. “I am still working, but plan to retire at the end of this year when I turn 71.”  A Mt. Holyoke alumna who dated Jack through college, Sally hopes to attend 1958’s 50th this June, where she hopes to run into old friends like Phyllis Freeman, who married Jack’s classmate, Don.